A breath-taking display from Ultimate Warbird Flights will see a Spitfire ML407 and a Hispano Buchón ‘White 9’ going head to head in a WWII dogfight.

The Grace Spitfire ML407 was originally built at Castle Bromwich in early 1944 as a Mark IX single seat fighter and served in the front line of battle throughout the last twelve months of World War II with six different allied Squadrons of the RAF’s 2nd Tactical Air Force. ML407 flew a total of 176 operational combat sorties amassing an impressive total 319 combat hours. ML407 was delivered to 485 New Zealand Squadron on the 29th April 1944 by Jackie Moggridge, one of the top lady pilots of the Air Transport Auxilllary (ATA), where it became the ‘mount’ of Flying Officer Johnnie Houlton DFC who was accredited, whilst flying ML407, with the first enemy aircraft shot down over the Normandy beachhead on 6th June D-Day.

The Hispano HA-1112-M1L “Buchon” is a licence built ME109 G produced by Hispano in Spain in the 1950’s. The “Buchon” is fitted with a late spec Rolls Royce Merlin, rather than the DB605 of an ME109. This installation gives the aircraft tremendous reliability still maintaining the fantastic looks and performance of the ME109.

Michael started flying at a very young age being inspired by his father. Winning his first aerobatic competition at just fourteen years old, he went on to become the youngest person ever to be awarded a CAA Display Authorisation for display flying.

At the age of twenty three he became the youngest ever British Advanced National Aerobatic Champion and today is the youngest Unlimited Level aerobatic pilot in Europe, aged thirty. Michael has performed all over the world as a solo display pilot and as part of a formation aerobatic team.

Michael is equally passionate about vintage aircraft and flying warbirds, ever since completing his Private Pilots Licence in a Bucker Jungmann, he is currently the youngest Spitfire pilot in the UK. Michael has flown over fifty different aircraft types ranging from gliders to airliners and is an active Commercial Pilot on the Boeing 757/767.

Tom gained his PPL in 1983. Since then, he has flown some forty types, accumulating around 7,000 hours experience. Some of this was spent as a parachute drop pilot, operating his own BN-2 Islander for 5 years and also participating in AFF (accelerated free fall) parachute drops. The late Pete Clark introduced Tom to Aerobatics in 1992. Flying Pete’s Slingsby Firefly, he won his first contest at Breighton that same year.

The following year the success continued with a win in the Tiger Trophy for Standard level pilots. At the end of 1994, Tom acquired a Zlin 50LA with which he won the 1995 UK Advanced Level Championship. Tom’s regular aircraft since then has been a Cap 232 which he bought in 1998. Tom won the Icicle Trophy in the same year and he also placed third in the Nationals. Tom has been Unlimited National Champion three times. In the last decade Tom has been heavily involved in display flying all over the globe and is now a Display Authorisation Examiner.

– At the European Championships, held in Spain, 1999, Tom was placed 24th overall and was top British pilot, winning the Len Perry Trophy.

– In 2000, Tom achieved 24th place in the World Aerobatic Championships in Muret, France, and also a second Len Perry Trophy.

-In 2002, Tom finished 14th in the European Aerobatic Championships in Lithuania.

– In 2004, the British Team won a bronze medal in the European Aerobatic Championships, the first British medal in an international competition since 1976. Tom placed 13th in this competition and was again the top placed British Pilot.

BACK TO WHAT'S ON

Drive down and get your business seen by thousands of potential customers.

Celebrating classic vehicles, both on the ground and in the air! Sywell Aerodrome, Northampton

The Sywell Classic Pistons and Props moves to 25th and 26th September 2021 at Sywell Aerodrome,
All existing tickets will be automatically transferred to the new dates.
http://www.sywellclassic.co.uk/ 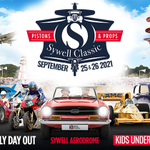 Merry Christmas from everyone at the Sywell Classic Show! 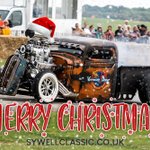 Find out the benefits of bringing your classic car or bike club to Sywell Classic.

Check out our frequently asked questions, venue information and contact details prior to the event.

We use cookies to ensure that we give you the best experience on our website. If you continue to use this site we will assume that you are happy with it.OkPrivacy policy